Monkey Around by Jadie Jang 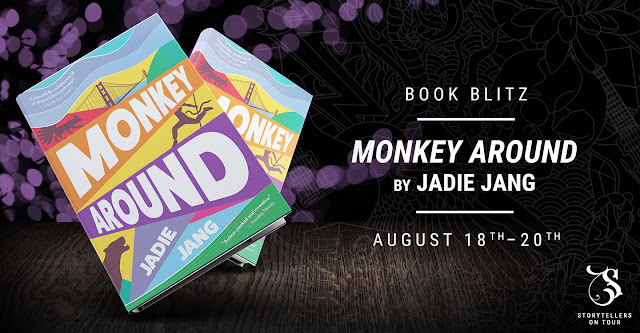 About the Book
As provided to me
San Francisco has a Monkey King – and she's kinda freaked out.

Barista, activist, and were-monkey Maya McQueen was well on her way to figuring herself out. Well, part of the way. 25% of the way. If you squint.

But now the Bay Area is being shaken up. Occupy Wall Street has come home to roost; and on the supernatural side there's disappearances, shapeshifter murders, and the city's spirit trying to find its guardian.

Maya doesn't have a lot of time before chaos turns up at her door, and she needs to solve all of her problems. Well, most of them. The urgent ones, anyhow. 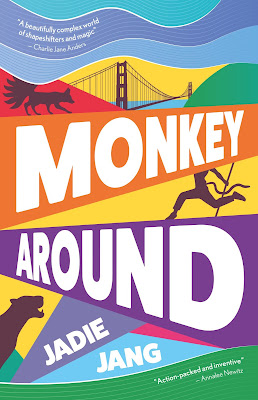 (Disclaimer: I received a free audiobook copy of Monkey Around from Storytellers On Tour for review purposes. All opinions in this review are my own and are honest and unbiased.)

Monkey Around by Jadie Jang was a refreshingly original story that had a lot going for it. My favorite part of Monkey Around was how Jadie Jang expertly drew from a range of mythologies, not just the oft-used European mythologies. Jadie Jang skillfully wove together multiple enthralling internal and external conflicts, though there were two I felt could have been resolved more fully. I found all the characters engaging in some way, be it through their personalities or their unique abilities. I especially loved Maya. While her boy-craziness got under my skin a few times, her orneriness, charisma, and humor were wildly entertaining.

Michelle Schechter narrated the book excellently. The feeling and personality she put into her narration really helped make the characters pop. She gave each character their own voice, changing her accent and timbre as appropriate for each character and situation. I wasn't a huge fan of her portrayal of Tez, as he sounded more raspy than "creamy" to me, but I still found her narration enthralling. The audio quality was also fantastic. Not only did Michelle Schechter make the work more vivid, but there were terms I would have stumbled over without research had I not listened to the audiobook version. If any more books follow this one, it would be great if Michelle narrated them, too.

It seemed to me that, while Monkey Around stands on its own, it could be the start of a series. If it is, I'd love to find out where it goes. There’s certainly enough room for the story to continue. Maya's romantic conflict wasn’t entirely resolved (I dislike love triangles, but this one wasn't obnoxious and since it was there, I wanted more closure), and she still has so much to learn about herself. Even if Monkey Around had a more closed ending, Jadie Jang's brilliant descriptions, engrossing prose, and intriguing characters would have left me wishing for a sequel. I recommend Monkey Around for mature young adults and adults looking for a fresh, fun, action-packed urban fantasy tale. 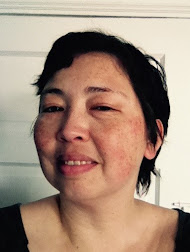 Claire Light (writing as Jadie Jang) is almost as organizy as her characters. She started a magazine (Hyphen) and an arts festival (APAture) with a cast of Asian Pacific Americans even more magical, if less supernatural, than the ones she writes about. She also got an MFA, went to Clarion West, and compromised between the two by publishing a collection of "literary" sci-fi short stories (Slightly Behind and to the Left) that maybe 100 people read. After wrangling arts and social justice non-profits for 17 years, her already autoimmune-disease-addled body threw a seven-year-long tantrum, leading our then-house-bound heroine into an urban fantasy addiction.

A few years, and a dozen Euro-centric-mythology-dominated urban fantasy series later, Claire sat up and said "I can do this!" and Jadie Jang, the part of her brain that writes snarky-fun genre romps, was born. She posts about monkeys every Monday under @seelight on Twitter. 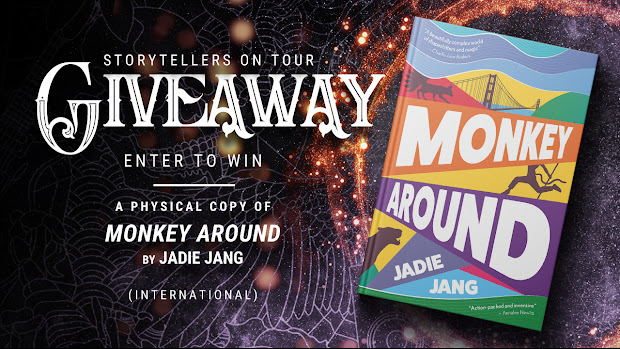 Storytellers On Tour is hosting an event-wide giveaway!
Click here or here for more details and to enter.
Prize
One physical copy of Monkey Around by Jadie Jang
Start Date
August 18th, 2021 at 12:00am EST
End Date
August 23rd, 2021 at 11:59pm EST
Visit the links above for details on this giveaway. General giveaway guidelines and terms can be found on my site here, though since Kayla C. Reviews is not in charge of this giveaway, those terms may or may not apply to this particular event.
5 stars Adult Audiobook Book Blitz Fantasy Fiction Paranormal Storytellers On Tour Review Supernatural Urban Fantasy