In the Minds of the Wicked by Warwick Gibson 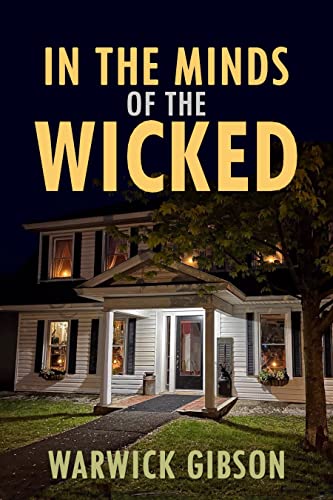 The disappearance of six young women across three counties in two years has raised a flag at the syndicate, and the coyote has been sent to do the groundwork for the coming investigation. Then the traveller drifts into town, ready to administer a certain type of justice. His justice.

First he must convince the head man of the Blue Ridge Nomads to help him, and then he must follow the facts to find the killers. Only at the last will he lay his traps for the guilty. When he is asked who he is, he has only one answer. He is a foot soldier, doing his job.

In the great tradition of Lee Child’s Jack Reacher and Dean Koontz’ Nameless, the Traveller series is at the cutting edge of the modern thriller.

You can find “In the Minds of the Wicked” on Amazon and Goodreads.

“In the Minds of the Wicked” by Warwick Gibson was a gripping thriller that captured my interest immediately. The main character, known primarily as “the traveller,” was a mysterious and compelling protagonist. Certain supernatural abilities combined with his mild demeanor, military training, deductive prowess, and no-nonsense personality to remind me of a cross between David Dunn of Unbreakable and, as mentioned in the blurb, Jack Reacher. Unlike those characters, however, the traveller worked with an extensive team, each member an expert in their field. I appreciated this fact because it broke from the lone wolf stereotype that many vigilante stories utilize and also incorporated more variables into the equation to spice up the story. Gibson expertly kept me on the edge of my seat for most of the novella, and I found him to be a rather meticulous author, tying up each potential plot hole I found. The author informed me this is a new genre for him, but I wouldn't have known it based on the quality of this work.

The first several chapters provided the perfect amount of suspense to hook me. The pacing was spot on and the plot was riveting. However, the flow of the story was interrupted by a brief foray into the source of the traveller’s abilities. While interesting, it was no less disruptive to the plot. If this were a longer work or even if it significantly impacted the course of the novella, it could have been excused, especially if it were handled in a way that flowed better with the rest of the story. Unfortunately, it was out of place in this work, and I think it would have been wiser to reveal the source of the traveller’s power in a separate novella or short story. There were also some awkwardly worded phrases that I only grasped once I reread them. Furthermore, the climax fell somewhat flat for me. Despite that, I enjoyed the novella as a whole. “In the Minds of the Wicked” is the first in the Traveller series, and I’d personally enjoy delving further into the organization the traveller worked for and its agents. In the meantime, I encourage fans of vigilante thrillers to check out “In the Minds of the Wicked.”

Trigger warning: This work contains references to sexual assault (off-page) as well as themes of violence, kidnapping, homicide, and suicide.