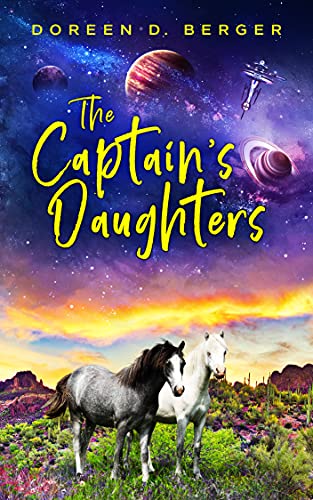 For most adolescents, growing up is hard enough when one has both feet planted firmly on the ground. But for mischievous, twelve-year-old sisters Diane and Robin, life is complicated further by the fact that their father, Captain William Marsh, is the commander of the starship Polaris. Living among the stars provides a never-ending realm of creative possibility for the free-spirited girls’ pranks and adventures.

When aliens bent on profit and revenge kidnap Diane and Robin, only their indomitable spirit, ingenuity, and a common love of trouble allow the pair to escape the alien vessel. Finding their way home seems assured until the sisters realize they have been taken further from home then they could ever have imagined, and that they must evade an enemy who will stop at nothing to get them back into his evil clutches. Blocked by interstellar battles, malevolent creatures, and overwhelming obstacles, the sisters fear they may never find a way to return to their own universe and to the father they love.

You can find The Captain's Daughters on Amazon and Goodreads.

The Captain’s Daughters by Doreen D. Berger was a treat to read. I loved how Berger put me right in the scene with her imaginative descriptions, and the technological advancements she included were intriguing. The characters were entertaining, but the girls were especially fun to read about, as witty and resourceful as they were. There was a great balance of drama, adventure, and political intrigue. My primary gripe about the book has to do with the flashbacks. There were too many, and most dragged on and distracted from the main plot, interrupting the primary story’s flow and slowing its pacing. It’s true that the flashbacks helped deepen my understanding and sympathy for the characters, but I felt that could have been achieved by weaving certain events into the natural timeline of the story instead of incorporating so many flashbacks.

The Captain’s Daughters was intended primarily for a middle-grade audience, but the mild violence, kidnapping, and vague insinuations of what could happen to the girls made this a read for the more mature end of the spectrum. Also, much of the story was written from the adults’ perspectives, not the girls’, which I could see some MG readers finding hard to connect with. That said, that point of view could also help some kids become more sympathetic toward their parents. This is a book I think parents would enjoy reading with their children, especially if they use the situations in it as a way to initiate important discussions, such as about safety, discipline, and respect. Teachers may enjoy sharing The Captain’s Daughters with their students for similar reasons. All in all, while I felt Berger could have done better at keeping the story on track and geared for the target audience, The Captain’s Daughters was a rollicking sci-fi adventure for the whole family. I especially recommend it for fans of Star Trek.