Behind the Veil by E.J. Dawson

Can she keep the secrets of her past to rescue a girl tormented by a ghost?

In 1920s Los Angeles, Letitia Hawking reads the veil between life and death. A scrying bowl allows her to experience the final moments of the deceased. She brings closure to grief-stricken war widows and mourning families.

For Letitia, it is a penance. She knows no such peace.

For Alasdair Driscoll, it may be the only way to save his niece, Finola, from her growing night terrors. But when Letitia sees a shadowy figure attached to the household, it rouses old fears of her unspeakable past in England.

When a man comes to her about his missing daughter, the third girl to go missing in as many months, Letitia can't help him when she can't see who's taken them.

As a darkness haunts Letitia's vision, she may not be given a choice in helping the determined Mr. Driscoll, or stop herself falling in love with him. But to do so risks a part of herself she locked away, and to release it may cost Letitia her sanity and her heart. 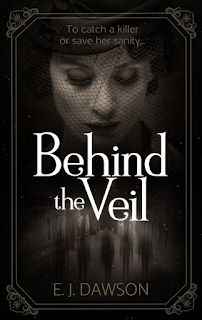 (Disclaimer: I received a free digital copy of this work from Blackthorn Book Tours for review purposes. All opinions in this review are my own and are honest and unbiased.)

A few words come to mind when I think back on Behind the Veil by E.J. Dawson. "Tantalizing" is one of them. "Harrowing," another.  "Spooky"? Absolutely. I finished reading this back in December 2021 and I still get goosebumps when I think about certain scenes. Dawson really knew how to make my skin crawl and my heart pound. I enjoyed Dawson's descriptions. No detail was overlooked, but at the same time, not all the details provided seemed important. That made the narrative drag at times. Dawson's writing style came off as curious and sometimes a bit stilted, but there's no denying its elegance. The supernatural elements were absolutely chilling. However, Behind the Veil wasn't just an excellent gothic horror, it was also a great mystery. I kept trying to guess who the perpetrator was only to be proven wrong each time. The suspense almost made me rush ahead so I could find out what happened next.

Perhaps my favorite aspect of Behind the Veil was how Dawson contrasted Letitia with the fake spiritualists. Not only did that lend Letitia an air of professionalism, but it also highlighted her morality, which made her more sympathetic. Her heartbreaking backstory, skillfully revealed a bit at a time, also aided in my understanding of her decisions and fears. I loved how Dawson explained Letitia's powers—the consequences and dangers of her profession were as fascinating as they were frightening. Her interactions with the hot-headed love interest provided a tad of humor to an otherwise bleak, disturbing story. Their development—how they grew together as well as individually—was convincing and even bittersweet. I highly recommend Behind the Veil by E.J. Dawson to those looking for an immersive gothic noir with just the right amount of romance, horror, and mystery.

Trigger Warning: Dark adult themes, death, murder, miscarriage, suicide, rape and pedophilia (those last two are mentioned only, there is no explicit content in the book). 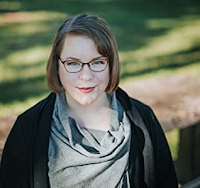 Beginning a writing journey with an epic 21 book series, Ejay started her author career in 2014 and has taken on the ups and downs of self-publishing with her fantasy series The Last Prophecy since 2016. At the start of 2019, she put the series on the backburner to write Behind the Veil in 25 days, and signed a publishing contract for the gothic noir novel to independent publisher Literary Wanderlust. Behind the Veil was released on the October 1st 2021. She resumed self-publishing a sci-fi series, Queen of Spades, released across 2020 and 2021, as well as signing another contract with Literary Wanderlust for NA fantasy, Echo of the Evercry. Believing in more than one path to a career in publishing, Ejay pursues self-publishing alongside querying traditional publishers with multiple manuscripts.