The Numbers Game by Miles Watson

About the Book
As provided to me
The Battle of Britain rages. London is in flames, and civilization itself totters on the brink. Does Pilot Officer Maurice Mickelwhite care? Not one damn. He may be one of the better fighter pilots in the Royal Air Force, but it's not by choice. Maurice is a mathematical genius, who, if not for Hitler, would be happily teaching algebra and calculus at university. To hell with the war! Maurice just wants his numbers. Trouble is...the numbers also want him.
Goodreads  🕮  Amazon US  🕮  Amazon UK

(Disclaimer: I received a free digital copy of this work from Black Coffee Book Tours for review purposes. All opinions in this review are my own and are honest and unbiased.)

Realistic and riveting, The Numbers Game is perfect for fans of historical fiction set in World War II, especially those who have a passion for mathematics and World War II aircraft. Cynical and weary, Maurice wasn't the stereotypical RAF pilot. I liked that because it made him more original and even more relatable in certain ways. Maurice's predictions kept me on the edge of my seat throughout the read. I was worried the mathematical focus of the story would mellow down my experience, but that wasn't quite the case. I loved the way the numbers almost became antagonists in their own right. If you’re looking for a short, hair-raising World War II tale, you should check out The Numbers Game by Miles Watson.

Trigger Warning: This work includes some disturbing material, including violence. 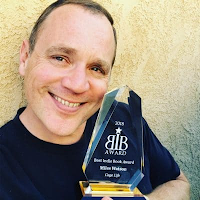 Miles Watson has won more awards and accolades than almost any independent writer of his generation. His various works have won the following:

He holds undergraduate degrees in Criminal Justice and History and a Masters of Fine Arts in Writing Popular Fiction, and served in law enforcement for nearly ten years before moving to Los Angeles, where he has worked on over 200 episodes of television and half a dozen feature films. But his first and last passion is writing.