"Some things cannot be mended with baling twine."

Drought has turned the paddocks of Paddle Creek Station to dust. Now the death of Clayton's older brother has shaken his family to its core and left a gaping hole in Clayton's memory. A hole his parents won't even discuss.

When Waringa, in the shape of a fox-spirit, tells Clayton it's up to him to save his family and to free the rain spirits held prisoner by the demonic Red King, Clayton must find a strength within himself he never knew he possessed.

But as Waringa guides Clayton towards his ultimate battle with the Red King, his quest brings his whole family closer to the abandoned homestead where his brother died. And as it does Clayton's actions uncover raw wounds, forcing hidden memories to surface.

Reflecting the issues explored in this novel, 15% of the publisher's revenue from the sale of this book will be donated to the charities Rural Aid and Beyond Blue. 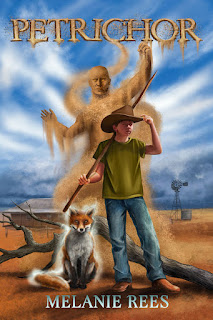 (Disclaimer: I received a free digital review copy of this book from Blackthorn Book Tours. All opinions in this review are my own and are honest and unbiased.)

Petrichor turned out to be one of those books that nestled so far into my heart that time couldn't wrest it away from me. I completed this book months ago and I still find myself thinking about it—and tearing up when I do. No joke. Petrichor was a super heavy read that deftly blended hope and despair. Its brevity did nothing to lessen the impact of the subject matter. Melanie Rees didn't just tug on my heartstrings, she ripped them out. She excellently captured the pent-up rage, sorrow, and guilt so often associated with grief. The deep symbolism and complex character relationships Rees included were utterly engrossing. Petrichor explored a horrible family tragedy and its consequences by intertwining the drama with elements of dark fantasy. Those fantasy elements helped make Petrichor more palatable, but they also added an extra layer of eeriness that was rightfully haunting.

The one criticism I have to offer is that a few of Clayton's actions struck me as pointless and forced. However, I don't think I would have thought that if I'd read this when I was a teen or preteen, which is the target age group of the book. Reading this as an adult made me want to jump in and comfort Clayton and explain why his parents were acting the way they were. Melanie Rees expertly drew me into the characters' plights, both emotional and physical. I enjoyed how Rees kept me wondering whether or not the fantasy elements were more than just figments of Clayton's imagination. Everything built up to a satisfying, stunning conclusion. Whether you're a young adult or older, if you love magical realism, dark fantasy, and drama—and if you're up for a harrowing yet imaginative read that delivers more than one gut punch—I urge you to check out Petrichor by Melanie Rees.

Trigger Warning: This work contains themes of suicide and trauma.

Melanie Rees has loved writing and reading speculative fiction for as long as she can remember, but started taking it seriously after a failed kidney transplant to help fill in the time and provide purpose while hooked up to dialysis machines. Since then she has published over 100 stories and poems in several anthologies by Black Inc. and Simon & Schuster; and renowned magazines including Cosmos, Apex, Nature – Futures, and Aurealis.

She works as an environmental scientist, where she has spent a lot of time working on outback properties, wetlands, forests, and along the coast. When not playing in the dirt or stuck up a tree, she writes.

Petrichor was inspired by her time working with farmers in northern South Australia during the millennial drought and witnessing the malaise and heartache in both the community and landscapes. She wanted to capture that and address serious issues farmers were facing, but at the same time inject some "magic" into the story.

You can find Melanie and links to her other work online on Twitter, Facebook and at www.flexirees.wordpress.com.

Offline she lives on the picturesque Fleurieu Peninsula on a bushland property, and lives in a strawbale house that she built with her husband.