David Easton believed his life was in complete ruins. He managed to scrape together just enough money for a one-way ticket on the fabulous Oceanis. It was the most luxurious liner afloat and he planned to revel in all its opulent pleasures until in the middle of the Atlantic crossing – he would leap from the fantail, thus ending his pain and misery. The problem was that he never dreamt that while counting down the hours until his death, he would meet Diana.

Despite her traveling with her overly protective parents who hoped to introduce her to a suitable husband while onboard, they managed to find each other. As their affections grew, strange things began happening on the ship. At first, it was just mental images and dreams, but as the days passed their very reality began to bend beyond anything their minds could have imagined.

Together they had to find out what was happening to the Oceanis and how they could find a way to save the great liner and all those aboard her. 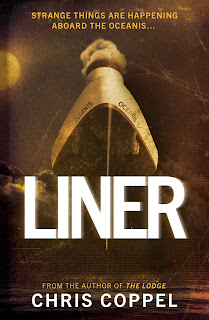 (Disclaimer: I received a free digital review copy of this book from Blackthorn Book Tours. All opinions in this review are my own and are honest and unbiased.)

With a large focus on character building, Liner by Chris Coppel proved to be a much deeper, more emotional read than I anticipated. I found that pleasantly surprising. I did expect more hardcore horror (for some reason, I pictured a cruise version of Stanley Kubrick's adaptation of The Shining when I read the blurb), but I appreciated that the novel wasn’t driven by gore or violence. Though there were a few intense horror scenes and other surreal, muted ones, this story came off more like a mystery drama with some light romance elements. Nothing in it particularly frightened me, yet it was unsettling in a low-key way that resonates with me even now—weeks after I finished reading it.

I predicted much of what occurred in Liner, but the novel was no less impactful or thought-provoking. I loved the undertones of cosmic horror that rang at various points throughout the work. I very much enjoyed the characters’ development and relationships. The bittersweet ending was my favorite part of the story. It packed the biggest emotional punch and raised the most profound questions. The more I read the book, the more I enjoyed it as new developments came to light. If I had less patience, however, I might have given up. Ultimately, I’m glad I finished it. I recommend Liner by Chris Coppel to those interested in a slower, character-driven, light horror story with a touch of romance. 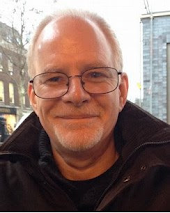 Chris Coppel was born in California and has since split his time between the USA and Europe, living in California, Spain, France, Switzerland and England. Chris taught advanced screenwriting at the UCLA film school and has been writing for over thirty years. As well as this upcoming title, he is the author of Far From Burden Dell, Luck, The Lodge and Legacy.

I was raised the son of a writer. My father wrote plays, films and novels. He was successful and suffered constant wanderlust. I was born in America when he was there writing Vertigo for Alfred Hitchcock.

I give that familial insight so that you can understand that I had the genes, I just needed to find my footing and get up the nerve to put pen to paper (or to be more accurate…open my laptop). Many would say that having a successful parent should make it easier to follow their path under the protective shadow of their parent’s success. Not so!

Writing is difficult. Writing in the hopes that you will be read and your works appreciated is terrifying. In my case, the fear of failure kept my ideas and stories buried in a back closet within my brain.

It is only now as I enter the latter part of my existence that I have been able to calm the fear and share my stories with those who may wish to read them.

I would like to think that it was my choice to write about things that go bump in the night, but it wasn’t. I had no idea that I would one day write tales of horror, but that is now what I do. With each new book, I feel drawn further into the dark void that we feel but rarely see.

I hope you will join me.”