The Theurgy of the Gods: A Flight in the Heavens by Gabrielle Gagne-Cyr 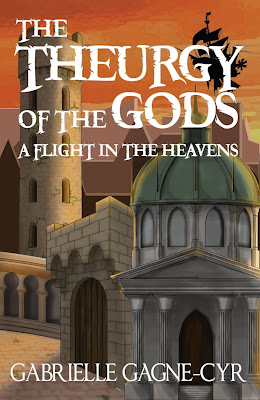 Fifteen years ago, Daemon Daromas murdered King Redamastys of Iscar and took the throne for himself using the theurgy of the gods. His brutal rule has brought nothing but terror and heartache to the people of Iscar, but a few remain who refuse to stand by while evil rules. Farrah leads a group of spirited renegades who swear to defeat Daromas. When a confrontation goes awry, however, they must escape Daromas's clutches with the reluctant help of Captain Feras Sadahl, Iscar's most revered sky corsair. Aboard her airship, they concoct a plan to even the odds and beat Daromas once and for all. As the renegades' adventure takes them soaring across Iscar's many territories—from a floating island in the sky to a range of mountains clutched forever in winter's grasp—they find that their quest to acquire the means to destroy Daromas may call for greater sacrifices than they can bear.

You can find this book on Amazon and Goodreads.

(Disclaimer: I received a free digital advance review copy of this book from the author. All opinions in this review are my own and are honest and unbiased.)

Reading A Flight in the Heavens made me feel like a child again. I was bouncing in my seat, pumping my fist, and pleading with the book to carry my favorite characters to safety. This steampunk-influenced fantasy adventure swallowed me whole. Putting it down caused me anguish. There was a good balance of romance, character development, and world-building. Each was woven expertly into the story. The descriptions were fresh and engrossing. The camaraderie between the protagonists was endearing. I loved that Gabrielle introduced Daromas early on. It helped solidify the threat he posed, and from that point on, I was fiercely invested in the protagonists' plight. Then I reached the cliffhanger and blurted out a word I won't share here. I didn’t see the ending coming, which is good, but at the same time, it felt a bit rushed. Perhaps it's because I didn't want the story to end. Despite my desire for a few tweaks at the end, I still felt the conclusion was plausible, and this book as a whole succeeded in making me more than eager for the next installment. If you're looking for an adventurous, LGBTQ+ inclusive story that'll sweep you off your feet, The Theurgy of the Gods: A Flight in the Heavens by Gabrielle Gagne-Cyr is the read for you.

Trigger warnings: This book is for adults and mature young adults. There are some brief scenes and mentions of torture/dismemberment, some gore, a couple of mentions of sexual violence, suggestive situations, and some profanity.