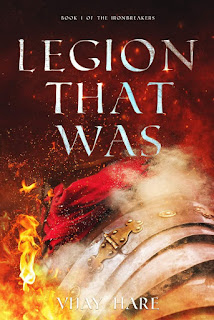 (Disclaimer: In exchange for an honest and unbiased review, I received a free digital copy of this book from the author. All opinions in this review are my own.)

In AD 12, Rome thrives under the rule of Caesar Augustus, but the scars of the Civil Wars remain. There are still men alive who would see the Republic restored, and there are those who will do anything to defend the empire that has taken its place. Gaius Sertor Orbus has given decades of his life to Rome's Twelfth Legion, yet one act of cowardice is all it takes to send him falling from grace. Banished from the Twelfth to serve as an auxiliary commander, Orbus struggles to come to grips with his fate. In the process of building a new cohort, he hopes to rebuild his life, find redemption. But his penance may be more than he can bear as he's caught in a lurid web of vengeance and political squabbles. His allies are few and far between. Betrayal seems to lurk around every corner. Self-loathing and depression haunt his every step. When a call to war gives him a chance to prove his worth again, he must decide if his redemption is worth the sacrifices he'll have to make.

Legion That Was by Vijay Hare was an excellent work of historical fiction. The writing was fluid, the plot was engaging, the descriptions were rich and true to the era, and the pacing was great for the focus of the story. The complex, dynamic characters jumped right off the page. I enjoyed the interactions between them—the camaraderie and conflict alike. My favorite parts of this novel were the battle scenes. They were so well-choreographed and vivid as to almost be cinematic. The main aspect of the book I thought could have been better, and I’m still on the bench over listing it as a true negative, was the incorporation of the flashbacks. While they were all intriguing and well-written, a few of them may have been more effective had they been shortened or incorporated chronologically into the story, if not cut out completely. That said, for the most part, they didn't interrupt the flow of the story much—in fact, most of them increased the emotional tension and provided more clarity into characters' actions. Legion That Was by Vijay Hare is perfect for lovers of historical fiction with brilliant character development, exciting battle sequences, and just the right amount of political intrigue. I know I certainly had a hard time putting this one down!

Legion That Was by Vijay Hare will be available in paperback and eBook on Amazon in autumn 2021, but Vijay will be releasing several short stories on Amazon before then. To connect with Vijay and stay up-to-date with his new releases, please visit his website. You can also find him on Instagram, Facebook, Twitter, and Goodreads.